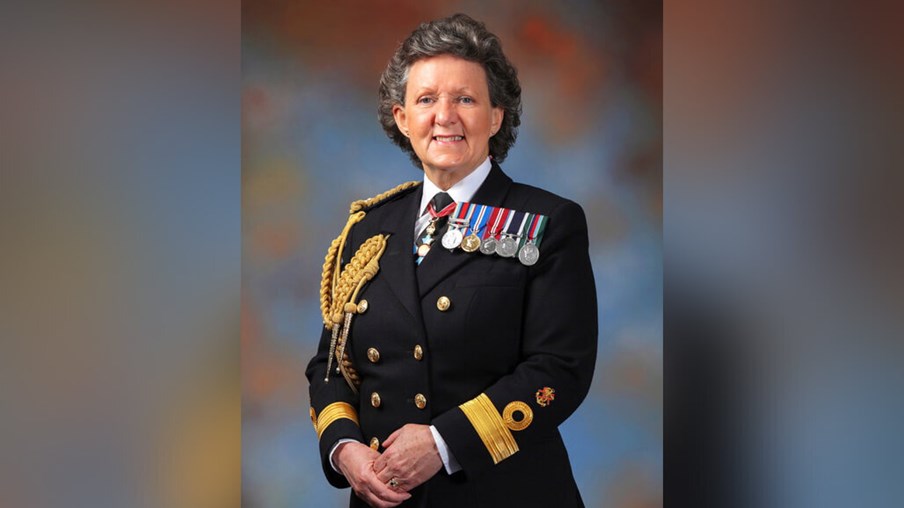 We are delighted to reveal that the Godmother of Spirit of Adventure is Commodore Inga J. Kennedy CBE QHNS QARNNS.

As former head of the Royal Navy Medical Service, and combining her 20 years of navy service with over 40 years working in healthcare, Commodore Kennedy is the perfect choice for the role, as we pay a mark of respect to the medical profession, who have worked so hard for the country during the past 16 months.

Commodore Kennedy has led a long and highly-distinguished career, combining roles as a Registered Nurse, Midwife and Lecturer from 1980 to 1998. Having joined the Royal Navy Reserve in 1987, she undertook full-time reserve service between 1998 and 2000 as a senior midwife in the Royal Naval Hospital Gibraltar.

In 2000, she joined the Queen Alexandra’s Royal Naval Nursing Service (QARNNS). After being promoted to Commander in 2005, she served in Afghanistan in 2011 and was made Captain in November of that year. She was promoted to Commodore in 2015 and began serving as Inspector General of the Defence Medical Services the same year. In 2017, Commodore Kennedy was appointed Head of the Royal Navy Medical Service, a position she relinquished only recently.

About her role as Godmother, she says;

I feel I’m accepting this on behalf of the wider medical community who have worked so tirelessly throughout this pandemic, and will continue to do so long after this crisis period fades. Personally, it is also a privilege to follow in the footsteps of Spirit of Discovery’s Godmother, HRH The Duchess of  Cornwall, given her role as Commodore-in-Chief of the Royal Navy Medical Service. I wish Spirit of Adventure, and all who sail on her, the very best voyages.

As a nation, we have been through 18 months unlike anything most people will see in their lifetime. It is thanks to the hard work of our medical teams and scientists that we are seeing the light at the end of the tunnel. When considering our choice for Godmother, we wanted to recognise this vital work and pay due respect to it. We feel truly privileged that Commodore Kennedy is to fulfil this role for Spirit of Adventure given her lifetime of service to both nursing and our armed forces.

This announcement is ahead of the ship’s official naming ceremony, which will take place on July 19, 2021 in Portsmouth. In the coming weeks, we will publish details of how guests can be involved with this special event, from the comfort of their home. On the day, Commodore Kennedy will officially name the ship.

In naval tradition, she will offer a blessing of safe sailing and good fortune marked with the smashing of a bottle on the ship’s hull. Reflecting Saga’s British heritage, the jeroboam in question will be English sparkling wine from the Kent-based Balfour Hush Heath Estate. The Commodore will then be given a tour of the ship and shown the world-class features onboard. Like her sister ship, Spirit of Discovery, Spirit of Adventure has been designed to feel small, holding a maximum of 999 guests, but also spacious, with each guest having the equivalent of a double decker bus of room on board.

Until this special day, we look forward to Spirit of Adventure’s launch, and her maiden voyage, which is set for July 26, 2021, calling at some of Britain’s most famous ports.