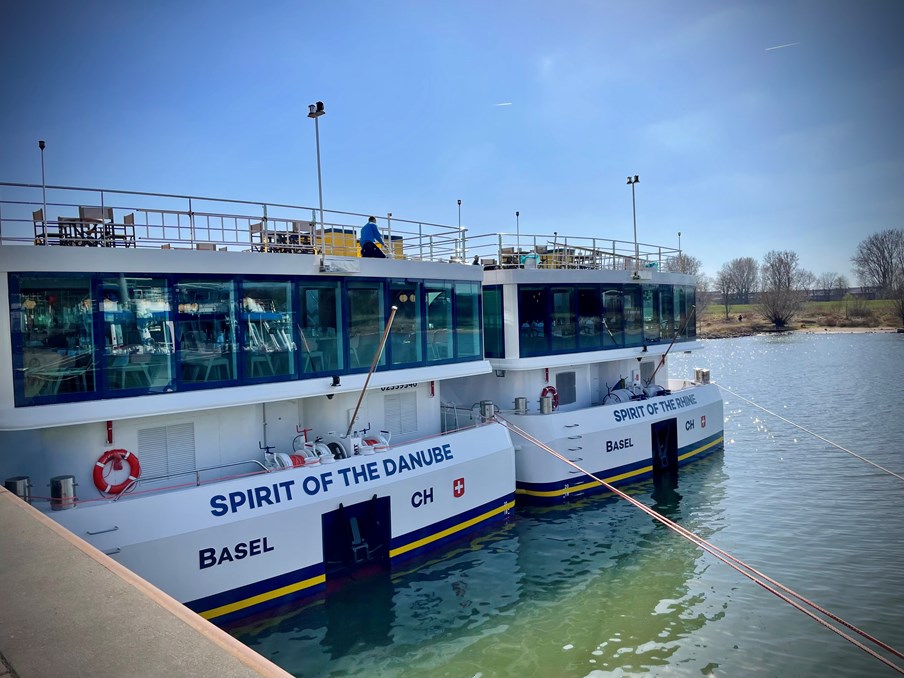 The ceremony was attended by more than 100 people who have been involved in the ship’s design and build. The event included speeches from Peter Wright, Saga Cruise’s Commercial Director, Otto Groen, CEO of Rijfers Nautical Management, which owns the ship and Vincent Bekker, owner of Vahali shipyard, which constructed the ship. The two ships’ Godmother, Dame Jenni Murray, an eminent British broadcaster and journalist, with a popular monthly column in Saga Magazine, then blessed the two ships with a short speech and traditional bottle smashing.

Spirit of the Danube’s week-long inaugural cruise will navigate the intricate Dutch waterways to the windmills of Kinderdijk and the fortified town of Willemstad before crossing the border into Belgium for included tours of Ghent, medieval Bruges and Antwerp, where the 16th-century Grote Markt is home to the famous Brabo fountain and Belgium’s largest Gothic cathedral. On return to the Netherlands, guests have the option to admire work by Dutch masters such as Aelbert Cuyp and Ferdinand Bol at the Dordrechts Museum before exploring Amsterdam, where the cruise concludes.

Spirit of the Rhine left Arnhem after the naming ceremony en-route to Amsterdam for its first post-naming cruise, which departs on 23 March. The seven-night solo travellers cruise starts with a full-day excursion to Keukenhof Gardens – one of the largest and most revered botanical gardens on the planet. There is also an included trip to The Hague, home to a wealth of important and historic buildings, and cruise to windmills of Kinderdijk plus a stop in Arnhem with an optional tour to learn about Operation Market Garden, a key moment in World War II. From there the cruise visits pretty Enkhuizen and Hoorn as it makes its way back to Amsterdam.

The two ships build on Saga’s boutique design philosophy of its ocean-going vessels, Spirit of Adventure and Spirit of Discovery, and will offer a luxury cruise experience for customers on Europe’s famous riverways.

Spirit of the Danube’s planned introduction to the Saga fleet was announced in February 2021 and she has since been under construction at the Vahali shipyards in Serbia and the Netherlands.

With designs inspired by the nature and culture found along the iconic waterways, both ships have been built with guests central to their design. Each vessel has four passenger decks and 91 guest cabins, hosting up to 182 customers and up to 50 crew. Each ship also features the first-class Saga facilities that guests have come to expect, complete with an en-suite bathroom and walk-in shower. There are two different types of cabin available on both ships. All have a clean, sophisticated design with Spirit of the Rhine reminiscent of Saga’s larger ocean ships and Spirit of the Danube based on an Art Nouveau and Danube Delta theme, with elements such as migratory birds used throughout the ship.

Last week, Spirit of the Danube was among one of the first ships be presented with its Green Award 'Gold' rating thanks to in-built technology that will significantly reduce emissions.

Dame Jennifer (Jenni) Murray is a British journalist and broadcaster, well-known for presenting BBC Radio 4's Woman's Hour from 1987 to 2020. Dame Jenni writes for a number of publications, including a popular monthly column for Saga Magazine, which is aimed at readers over 50 and regularly features A-list star interviews, along with articles on food and drink, home, wellbeing and relationships, travel and leisure and money and motoring.

Saga is a leading provider of products and services primarily tailored for customers over the age of 50 in the UK. The Saga brand has been carefully developed over the past 60 years to become one of the most recognised and trusted brands among UK consumers over 50. Saga is synonymous in the UK with the over 50s market and is recognised for its high-quality products and services. These include cruises and holidays, home and motor insurance, savings and share dealing and the UK’s award-winning Saga Magazine.